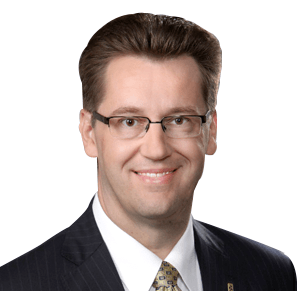 Oliver Buechse is the co-Founder and Executive Director of Advancing AI Wisconsin. In this role he has championed a community-based effort to increase awareness of digital disruption in Wisconsin and build educational programming for business audiences.

He is also the Founder of My Strategy Source and has pivoted his focus from traditional strategy development to assisting companies and government entities (he is the initiator of the Digital County effort in Wisconsin) in navigating digital disruption, complementing his efforts on the educational side. Oliver teaches the MBA course "Waves of Disruption" at St. Norbert College and has been featured keynote speaker throughout the State on the topic of Artificial Intelligence and other disruptive trends.

Oliver originally learned the strategy business in Germany, Austria and California during his time with McKinsey & Company and subsequently as SVP of Strategy for Union Bank and Mitsubishi UFJ Financial Group. He came to Wisconsin in 2010 as Chief Strategy Officer for Associated Bank.

He is a Board member of the Wisconsin Bankers Foundation and in this role has helped build the first online marketplace for Financial Education – MyMazuma.com. He is a founding Board member of FINN, the Forum for Innovation, driving improvements to the entrepreneurial ecosystem in Northeast Wisconsin, a director emeritus of New North and an active member of the New North Business Intelligence Committee.

Oliver holds a PhD in Economic Psychology from Alpen Adria University in Klagenfurt/Austria. He lives in De Pere with his wife and three of his four sons.